for one of our long-term clients, systemair, we created two 3d animation online videos, that were released with new plugins of this company intended for the professionals working in the constructions and architecture. the main aim of this videos was to present the best features of the plugins and lead the audience through a simplified process of their usage.

the first video presents the “design plugin” and its main functions. in the beginning we find ourselves in a dark space where one cannot clearly see or identify what is this space and what it contains. as the time follows, there is more and more light, and it reveals some of the products that could be found and adapted in the plugin. also, the building where the products are placed is getting more specific shape. in the second part of the video, we move to the interface of the plugin as such. from the visual point of view, the video follows up on our previous cooperation with systemair and on their overall style of the communication. the idea of splitting the video into two parts is reflected also on the visual side – there is the intro part that is more stylised and less descriptive and then the core of the video that is happening inside of the plugin and visually respects its interface and design.

the main idea of the second video comes from the features and usage of the air-conditioning units that are part of the second plugin – “configurator”. we decided to work with the principle of the blood circulation in the human body that has a heart in the centre – the same as the heart of the building that is the main air-conditioning unit. in the beginning and at the end of the video we find ourselves in the network of vascular system, where the fresh, blue air flows to the building and the used, red one goes out.

as well as the first video, this is a 3d animation video that has two main visual styles – as was mentioned, one of them is used in the intro and outro of the video, is more abstract and work with the flow of red and blue particles. it changes from the dark space and tones in the beginning to very bright at the end. the core of the video is placed into the plugin itself, same as it was in the first video. it’s more specific and precise and it works with the interface of the internet browsers and softwares that the plugin is intended for.

both videos were created with english voiceover since they are meant for international market.

animation video #dudova was created as part of a cooperation with the skorpio digital agency and business academy dudova in bratislava. it was part of a campaign that the school and the agency started at the time of upcoming entrance exams. it was aimed at the potential future students at the school – the students of the primary schools that are deciding how and where to continue with their studies. video was part of the whole package of the online activities, it presents the main features of the school in simple and easily recognisable way and highlights some special benefits that might not be available at other schools.

#dudova is a 2d animation video based on a minimalistic visual concept that is based on retro light signs and banners from the 90’s and it works with just a few neon colours on a black background. since the main target group were students finishing the primary school (basically teenagers), the video is using shortcuts, icons and minimal language that is typical for them. the visual concept of the video is also used on a print poster and the whole online communication of the school on social media. 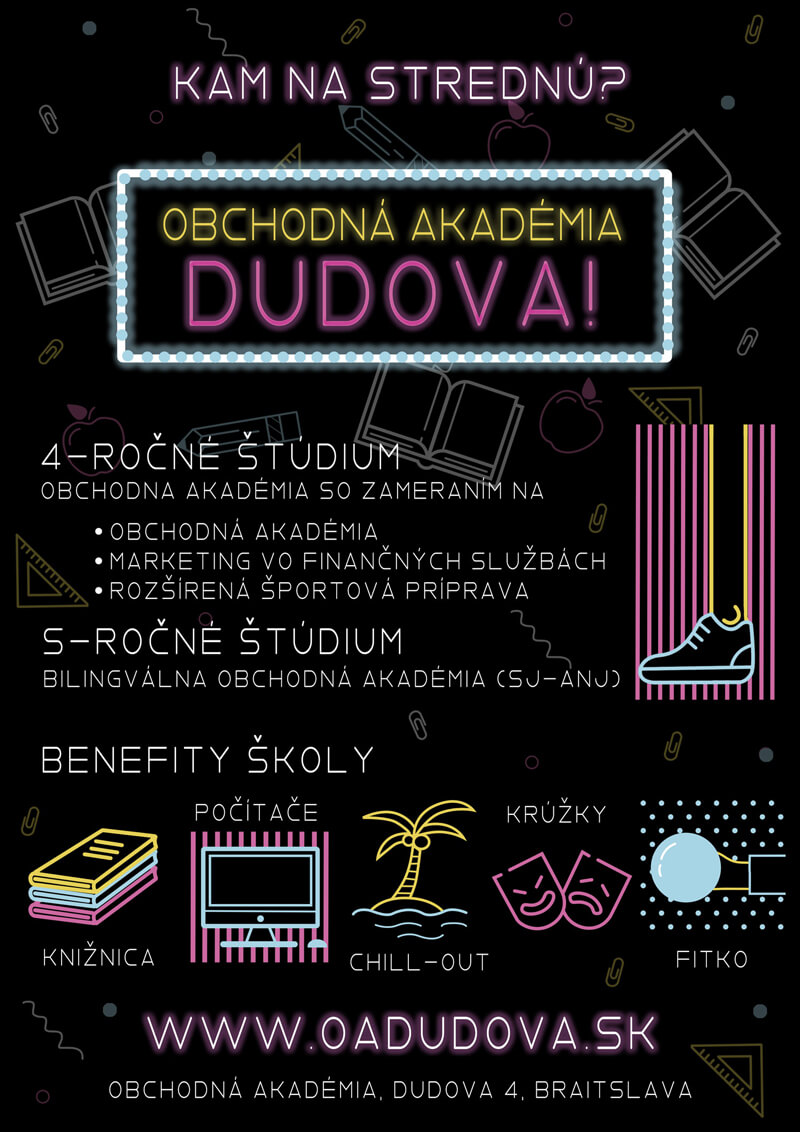 project “future city for future nomads” was created for the company ecocapsule, that is designing and producing smart, self-sustainable “capsules” with unique design. animated video that we did together is presenting a futuristic vision of the future world. in this world, the traditional way of using the space is expanded (and sometimes replaced) by a new concept that creatively uses all the horizontal spaces, streets, and roads thanks to the diverse usage that ecocapsule has. this video shows all the possible functions of the capsule and takes us through 1 day spent in new york in 2026. it’s presenting a possible solution for the possible housing crisis in some parts of the world.

this project is made by the 2d cut-out animation. the art design is based on the combination of vector illustration and 3d visualisations of the capsule. the aim was to create the “city of the future” but not too much distant. that is why there are elements in the video that are well-known and exist nowadays but also some small “sci-fi” details. the visual style is based on the simple design of the capsule as such, and on our ideas about the world of future that is clean and bright. just a few other pastel colours were added to better explain some ideas in the video.

We created a series of short animation videos that presents products from a “Fire safety” line by Systemair. The assignment was to make it clear that the products come from the same category and that they have something in common, but also to find a way to distinguish the videos at the first sight.

It’s extremely important for the client that the concept of their communication is not only visually attractive but that it is based on technically correct versions of their products without any stylization. That’s why it was clear to use 3D animation for this project. The whole idea in each of the videos was to deconstruct each product at the beginning and then put the pieces together in the rhythm of the music. In the end of each video, we chose the most spectacular characteristics of that product that would be important for the potential client. In this case, the music was composed especially for this series.

The whole project is combination of 3D animation and 3D infographics and we used client’s design manual to create the colour scheme. The length of 10 seconds for each product was agreed with the client to focus only on the most important features. The concept is prepared in a way that depending on the client’s needs, new product videos can be made with new colour schemes and music variations.

Logo animation of the company Prefis.

At the end of 2018 we decided to create a Christmas/New Year present for our friends and clients. It was clear from the beginning that the main character has to be Pluto. The monochromatic illustration of the superhero dog flying through space on a rocket-bone symbolically represented a “trip” to the new year.

We were also looking for the best way to get the idea to the people and that’s why we decided to print the motive onto the top of Remini notebooks.

We followed up on our cooperation with Panta Rhei during the reconstruction of one of their stores in Bratislava city centre. We were given a task to create 4 large-scale illustrations, that were to be printed on special panels and placed in the display of the reconstructed space. Since after the reconstruction, the store was about to be used also as a coffee place, co-work and a venue for a number of cultural events, our aim was to present all these new activities.

Firstly, we created several concepts of the panels for the client. The winning idea is presenting a lot of different elements that are typical for each of the activities. Therefore each of the panels contains several smaller frames. Some of them contain very concrete things, some of them are filled with more abstract items or situations. Moreover, each panel has its own color palette, chosen carefully to work with the other ones.

Before the election in 2020, we joined forces with a non-profit organization Zastavme korupciu and we created a 2D animation video that is showing to the viewer, how different parliament parties voted in some of the most crucial moments in the past few years. The aim of this project was to help the people to get a better view of the political scene and to decide who to vote for.

This video has a minimalistic style based on the paper structure and visual. Some parts of the video were made out of a real paper and animated frame by frame under the camera. Other parts, mainly the text, were animated digitally. The base info for the video was provided by the organization, but we were given a complete freedom in the visual style and animation and thanks to that we could use methods that are not really common and we don’t usually have time and space for those.

For our client Slovnaft we created a 2D animation video, that is showing and explaining different rules and duties for the employees and external suppliers that they need to know and use while working in the company especially during critical situations. The video has a simple visual style and minimalist color scheme but despite very technical content, we wanted to enrich it with a little bit of humor mainly through the characters.

The production of this project was most difficult in the beginning during the script creation. There was a huge amount of information that had to be part of it and that has a very strict way how to be delivered. On the other hand we wanted to show them in the most simplistic manner, so that the viewer can very quickly understand them. We worked with numerous characters that were very similar, only differentiated by colors to show their position in the company or their work activity. The characters are moving simplistically, even in a grotesque way, they have no eyes or noses and the mouth is used only in the necessary situations. The most important information is delivered by the voiceover and infographics. The video is animated by the traditional cut-out 2D animation.